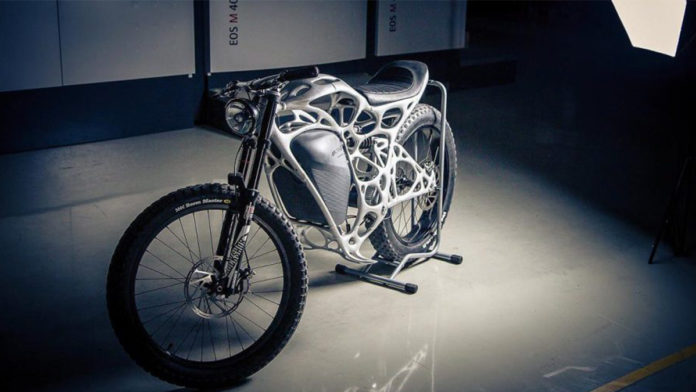 Hi Machine Bros!
Do you want to know which are the biggest 3D printed objects? Stay! here we will show you.

There are still many people who associate 3D printing with small parts, this time we want to end this myth or belief and today you will find the biggest 3D printed objects. 3D printing is a technology that has been advancing rapidly, to the point that today it is possible to find large-scale printers, capable of large-scale printing, and this is exactly what we want to show you, we will talk to you of 3D printed objects that have large physical dimensions.

45 days was the time it took to finish this 3D printed house in the Tongzhou district of Beijing. With the use of this technology, it was possible to build a two-story house with 400 square meters and walls up to two and a half meters (2.5m) high.

In Dubai, a company called Apis Cor built a 2-story building, with a height of 9.5 meters and an area of 640 square meters. According to the company, the project took 500 hours of printing, 8 hours per day.

Although apparently there is still some skepticism about this achievement announced by Apis Cor, this is because in one of their first constructions they talked about the possibility of building houses in 24 hours, but in reality, it took them 4 months to build that house.

In Shanghai, China, in February 2019 the longest bridge in the world printed in 3D was announced. The parts of the bridge were 3D printed by 2 robotic arms and the printing time was approximately 19 days. The project managers (Tsinghua University) claim that the bridge cost two-thirds of what it would have cost to build it in the conventional way.

In Madrid, on December 14, 2016, the first 3D printed pedestrian bridge was inaugurated. Which measures 12 meters long and has a width of 1.75 meters, it was designed by the Instituto de Arquitectura Avanzada de Catalunya (IAAC).

The Wave is a kind of 3D printed tent (or camper), designed by Randy James in collaboration with Saskatchewan Polytechnic, in the city of Saskatoon, Canada.

It is 4 meters long, 1.8 meters wide and weighs approximately 272kg. This project took approximately 230 hours of printing. You can find out more about this project here World’s first 3D printed camper trailer completed.

Prudence is a sculpture that takes the shape of a female golfer. This sculpture is 1.9 meters tall and has an approximate weight of 18kg. Prudence is made up of 21 pieces printed in 3D with PLA, which was made by a company called Mikrotvornica for its exhibition in Dublin Abigail O’Brien’s.

James Bruton, youtuber who owns a robotics and 3D printing channel, scanned himself, and then printed a model of him in large-scale 3D.

This job took him approximately 500 hours to print, with 2 printers he kept working practically 24/7. With this sculpture, James managed to break a Guinness record for his time. We will leave you the link of James’ YouTube channel “XRobots” and his website xrobots.co.uk.

On January 15, 2016, a replica of a titanosaur printed in 3D was exhibited in New York at the Museum of Natural History, the model is 37 meters high, was made in Canada and required half a year of work.

The aeronautical company Airbus officially presented its small Thor drone at the ILA Berlin Air Show. This aircraft was completely 3D printed, it has an approximate weight of 21 kg and is about 4 meters long. According to its creators, this plane consists of approximately 50 pieces and can be printed in 4 weeks.

Relativity Space, an American Start-up developed a robotic arm capable of 3D printing with metal, this in order to develop rocket engines. In general, rocket engines consist of many parts and with the use of 3D printing technology, it is possible to develop them with only three (3) parts, having fewer parts reduces the probability of failure. Furthermore, the Aeon 1 takes about a month of work to manufacture, compared to the 6 months it takes using traditional technology.

The Aeon 1 engine was used for the Terran 1 rocket, which is manufactured using the same 3D printing technology. The Terran 1 has approximately 100 times fewer parts than other rockets.

The printing time for this vehicle has been reduced to 45 hours thanks to the work in conjunction with Oak Ridge National Laboratory. Local Motors announced in 2016, Olli an autonomous electric vehicle with 3D printed parts, which could be classified as a kind of “minibus”.

It is necessary to mention that even though the manufacturers call The Light Rider “an electric motorcycle”, its performance really resembles a high-end e-Bike.

The University of Maine’s Advanced Structures and Composites Center, on October 2019 broke the Guinness record for the longest 3D printing in the world. They achieved this feat by 3D printing a functional boat 25 feet long (7.62m) and 2,267 Kg. It was printed in 72 hours.

The boat ended up measuring 2.13 meters long and weighing approximately 18.1kg. One of the highlights of this project is that a similar bottle could have cost $800 USD, but cleaning and shredding 250 recycled plastic bottles (where milk was packaged) only costs $3.2 USD.

The first 3D printed marine propeller, its name is WAAMpeller and it was built from 298 layers of nickel aluminum bronze alloy.

Five companies were involved in this project: RAMLAB, Promarin, Autodesk, Bureau Veritas and Damen. It should be noted that a second propeller was later manufactured.

The propellers are functional and installed in a Damen Stan Tug 1606.

In 2018, Bugatti had produced the first 3D printed titanium brake caliper, earning the title for the date of the “world’s largest titanium functional component produced by additive manufacturing”.

The printing technology used was SLS (Selective Laser Sintering), the liner weighs 2.9 kg, comparing this weight with the aluminum manufacture that has a weight of 4.9 kg we can see that it is a significant reduction in weight. The printing time was 45 hours and 2213 layers.

By 2016 Boeing with the U.S. Department of Energy’s Oak Ridge National Laboratory (ORNL) created a tool for cutting and drilling, which helps in the construction of the wings of the generation of Boeing 777x. This tool was 3D printed.

By the date of its manufacture it had managed to obtain the title of “longest solid object 3D printed in a single piece”. The manufacture of this tool took 30 hours, instead of the 7 days that would have been necessary using other techniques. The part is made of a combination of 80% ABS and 20% carbon fiber and weighs approximately 745 kg.

Michel David, an artist in Berlin, decided to design and 3D print a giant fidget spinner, in collaboration with BigRep and All3dp.

Sofa So Good is a sofa printed in 3D using SLA technology.

This model was printed on a 3DSystems’s ProX 950. It was created using approximately 2.5 liters of resin and ended up weighing approximately 2.5 kg. The So Good Sofa measures 1.5m x 0.75m x 0.55m, and was designed by Janne Kytannen. It is worth mentioning that to print this model no supports were required due to its amazing design.

The frame is made of space grade aluminum. The purpose of this project was to demonstrate the advantages of manufacturing with this technology.

“Hundreds of millions of pounds are spent on medium to large-scale components by the aerospace industry each year. There is great potential for significant cost savings in terms of waste and production efficiency if we can transform the way these parts are manufactured. This demonstration clearly shows the potential of the WAAM process with this newly-acquired machine for changing future manufacturing processes”

It is clear that 3D printing is here to stay. And it’s not only to print on a small scale, with 3D printing it is possible to create things that have large physical dimensions.

Another point to take into account is the possibility of printing large things with small printers, but in parts, and then joining them, we will talk about this in another article.

Large-scale 3D printing has managed to lower costs and reduce manufacturing times in certain areas or branches, for example, in the aerospace industry with the construction of the Terran 1 rocket.

Every year there are new large-scale 3D prints, for this reason this article will be constantly updated.

How to 3D Print Photos (Lithophane)

Beginner’s Guide: How to Paint Your 3D Model

Easy Way of How to Design Gears

Does the Orientation of a Part Matter in 3D Printing?

How to Apply Annealing to 3D Prints

Assembly and Calibration of the Creality Ender-3

We use cookies on our website to give you the most relevant experience by remembering your preferences and repeat visits. By clicking “Accept”, you consent to the use of ALL the cookies.
Cookie settingsACCEPT
Manage consent

This website uses cookies to improve your experience while you navigate through the website. Out of these, the cookies that are categorized as necessary are stored on your browser as they are essential for the working of basic functionalities of the website. We also use third-party cookies that help us analyze and understand how you use this website. These cookies will be stored in your browser only with your consent. You also have the option to opt-out of these cookies. But opting out of some of these cookies may affect your browsing experience.
Necessary Always Enabled
Necessary cookies are absolutely essential for the website to function properly. These cookies ensure basic functionalities and security features of the website, anonymously.
Functional
Functional cookies help to perform certain functionalities like sharing the content of the website on social media platforms, collect feedbacks, and other third-party features.
Performance
Performance cookies are used to understand and analyze the key performance indexes of the website which helps in delivering a better user experience for the visitors.
Analytics
Analytical cookies are used to understand how visitors interact with the website. These cookies help provide information on metrics the number of visitors, bounce rate, traffic source, etc.
Advertisement
Advertisement cookies are used to provide visitors with relevant ads and marketing campaigns. These cookies track visitors across websites and collect information to provide customized ads.
Others
Other uncategorized cookies are those that are being analyzed and have not been classified into a category as yet.
SAVE & ACCEPT